A guide to understanding nonbinary 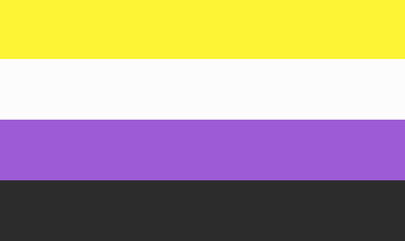 To put it in simple terms, nonbinary means that you do not conform to the binary gender system that society placed for us. We reject being exclusively male or female entirely.

There are many misconceptions to what nonbinary really means. Many people believe it's a third gender, or that if you are nonbinary then you are genderless. These are not true! While there are many nonbinary people who do feel genderless, it does not mean we all are. Nonbinary is a spectrum and an umbrella term that encompasses identities such as genderfluid, agender, bigender, etc; it is not a singular identity. Not all nonbinary people are the same!

Is being nonbinary new?

Not at all. While the term itself may feel new, the concept of being nonbinary has existed for ages, extending back to the 11th century where people would use it/its pronouns instead of she, he or they.

Many nonwhite cultures celebrate being outside of the gender binary as well and even have special terms for them, such as Two-Spirit, Hijra and more. This is because the traditional gender binary we know today was the result of European Christian colonizers enforcing their gender roles and religion onto Indigenous and other nonwhite people. To say that nonbinary doesn’t exist is disrespectful to these cultures and is laced with racism and xenophobia.

Do nonbinary people have to use they/them or present androgynous?

The same reasoning can be said for clothes and presentation. Nonbinary people do not owe anyone they/them pronouns or androgyny; they are free to present themselves however they want.

What sexuality can nonbinary people be?

They can have the same labels as everyone else. Nonbinary people can be bi, pan, queer, and yes, even gay and lesbian. Yet another common misconception about being nonbinary is that we cannot use "binary labels" when this is far from the truth. Nonbinary people have always been included in every sexuality, which includes homosexuality. Forcing nonbinary people to use specific terms such as trixic, toric, etc. forces us into a “trinary”, which is the opposite of what we are.

How can they be gay/lesbian?

Nonbinary is a spectrum, and as such, many nonbinary people will fall onto either side of the spectrum. For example, a nonbinary gay can be male-aligned or unaligned. As long as they aren’t a woman or woman-aligned, they are gay.

A carrd that explains it very well can be found here and can help you understand nonbinary lesbians/gays better.

Many nonbinary people prefer to simply be called nonbinary, and are comfortable identifying as such, and that's okay! However, there are many nonbinary people who accept the trans label with open arms, and prefer both labels. Many trans people also identify as nonbinary themselves. For example, I am a transmasc nonbinary; I do not fully identify with being male.

Nonetheless, it depends on the person. While nonbinary people can fall under the trans umbrella, many n.b people may not feel comfortable being called trans! Be sure to check with them first before calling them so.

Also, an important reminder, the white stripe in the trans flag is for nonbinary people.

How do I know if I'm nonbinary?

If you do not exclusively identify with the two binary genders, then you are nonbinary.

There is no checklist to being nonbinary. There's no test to pass. You can dress however you want, use whatever name you want, use any pronouns you want; it doesn't matter. It's your identity and your presentation. Anyone can be nonbinary.

The only qualification you need to be nonbinary is that you identify with being nonbinary.

Yes. Nonbinary people can medically transition. It is their body and what they want to do with it is their choice and 100% valid.

A common example of nonbinary transitioning can be [butch] lesbians taking T or having top surgery. This can help ease their dysphoria.

Absolutely. Dysphoria is not limited to binary trans individuals! It's a reason why many nonbinary people want to medically transition. The same reasoning can be said for euphoria.

You should use whatever terms they tell you they are comfortable with. Not doing so would be misgendering.

Not every nonbinary person is the same. Some may prefer feminine terms, others may prefer masculine, and sometimes others prefer to keep things gender neutral. It completely depends on the person.

However, you should always ask what terms they are comfortable with so you can know beforehand.

If you are a nonbinary woman or fem-aligned, then you may speak on gender-based oppression such as misogyny. Not allowing nonbinary people to participate in these discussions ignores our struggles, as we are constantly percieved differently by people in public. These issues can affect us as well.

Are all nonbinary people AFAB?

Also, avoid using these terms (AFAB / AMAB) to describe nonbinary people if they are uncomfortable with it. To most of them, it feels like misgendering.

Why can't we just use NB instead?

Black people have constantly said that NB is a term used for non-black individuals, and to ignore them and continue using their terminology would be disrespectful and would be appropriation. Listen to black people.

What are some nonbinary identities?

These are terms nonbinary people use to describe their experiences and connection to gender.

Thank you for reading this carrd! I hope it helped you learn about nonbinary people. 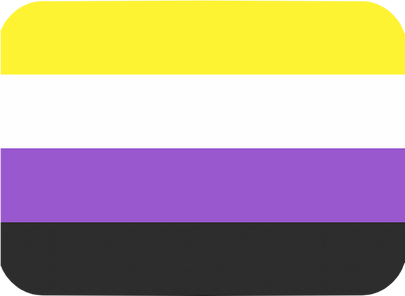 This carrd will be edited and constantly grow as I get new information. No matter how silly this all sounds, please remember to support nonbinary people. Be good allies, listen to our voices, don't act as if you know our identities better than us.

That is all we ask!

This carrd was made by a transmasc nonbinary gay.